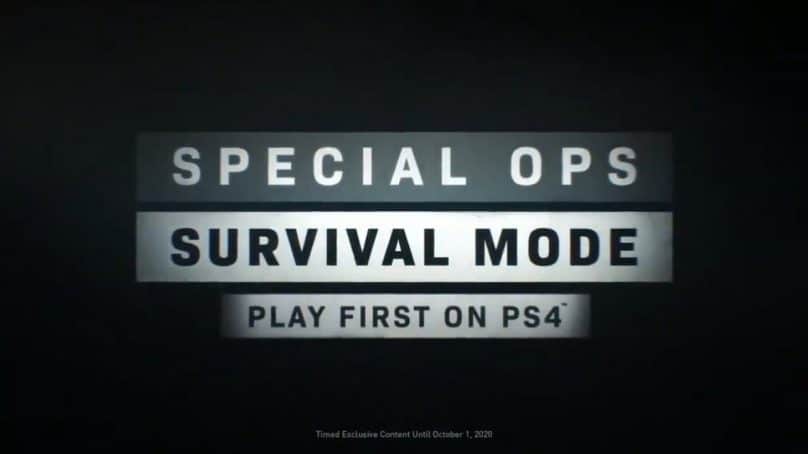 Captain Price, we have a problem.

After the reveal of the Modern Warfare Campaign, fans were outraged following a one year exclusivity announcement regarding Survival Mode. This announcement comes from PlayStation’s State Of Play broadcast.

In 2011, Modern Warfare 3 launched with survival mode, quickly becoming a favorite. Survival mode pits players against groups of increasingly difficult enemies. Players who were hoping this mode would return now have two options – wait a year, or buy a PlayStation 4.

While Call Of Duty fans are used to one week early access for DLC on PlayStation, exclusivity this year is a bit, drastic. With crossplay becoming a reality for the franchise, it came into question what exactly PlayStation would get – now we have our answer.

PlayStation has been a main sponsor of the Call Of Duty series since Black Ops 3 in 2015, taking over Microsoft’s contract. Due to this, PlayStation has always been entitled to an exclusive from Modern Warfare. However, the deal they struck this year left fans feeling shocked.

The timing of this announcement comes just a few days after the conclusion of the crossplay beta. This year, Activision has promised free, same day DLC for all players and crossplay servers. It’s understandable that players would be angry, considering Call Of Duty is an annual series.

Survival mode will be available at launch for PlayStation 4 users, and released for Xbox and PC users on October 1st, 2020.

Be sure to keep up with IPlayCOD through our Twitter or Facebook pages. Additionally, come join our Discord server as well!

Top 5 Weapons We haven’t Seen Yet in Modern Warfare