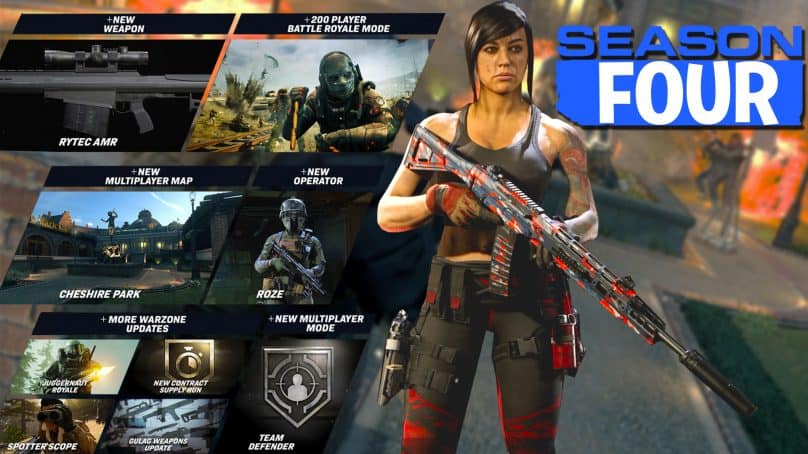 In a post today by Infinity Ward, it was revealed that the long-awaited Midseason update for Modern Warfare would drop at 11PM PST Tuesday June 29th. This update includes new Warzone and Multiplayer content, including a boost in player count from 150 players to 200.

Drop into Verdansk with 50 additional players added to the fight. Modern Warfare servers will now support up to 200 players across all Warzone modes. Be sure to watch your back – or one of 199 other players will…

Modern Warfare update 1.23 will take up approx 22-36 GB for players who own the full Modern Warfare game, with an additional 3.5GB data pack download specific to the Multiplayer portion of the game.

Free to play Warzone players should expect a 22-30GB download. PLEASE NOTE: After installing the update, the overall game size will be REDUCED from before the download, decreasing the required hard drive space.

Meet your new best friend. The Rytec AMR is a 50 caliber, heavyweight sniper – perfect for long-range engagements. A well-placed shot can wreak havoc on any foe… or team.

The Rytec AMR will be available as soon as the update drops for Multiplayer, Warzone, and Spec-Ops modes after finishing the unlock challenges.

Secure a Supply Run contract for a steep discount at any buy station across Verdansk. Be quick though, as its effects only last a limited time.

Spotter scopes are now available in Warzone! Spot enemies afar without fear of being seen via a scope glint.

Located in urban London, England, Cheshire Park is a picturesque garden and conservatory where Operators will battle from door to door or through the central flora-filled area​.

Take to the townhomes for long sightlines, the stores to capture objectives through intense CQB battles, or take to the side streets to take some shortcuts. If you dare, try to challenge those who may set up shop in second story windows, phone booths, front yards, or scaffolding.

Team Defender returns from Modern Warfare 3! This mode is a spin on Capture The Flag, where there is only one flag for both teams to secure. The first team to secure the flag for the allotted time period wins.

Available for $4.99 is the Warzone starter pack, which includes 500 COD points, Amalam Weapon Blueprint and the Alchemist Operator Skin.