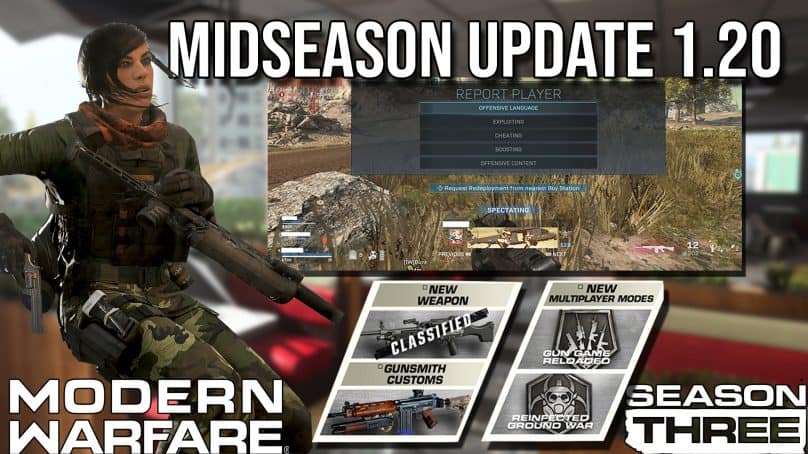 Patch 1.20 has now released for Modern Warfare across all platforms. For console, this patch releases alongside a data-pack for the game. PS4/Xbox One players will have to install the required patch which is 10 GB on PlayStation, and 13 GB on Xbox One. For players who only own Warzone, this patch will only be 9 GB.

Once the patch is downloaded, to access Multiplayer, Special Ops or Campaign you will need to install a separate Data-Pack which is 17GB on PS4 and 18GB on Xbox One. Warzone only players who have the free-to-play COD client are exempt from this. PC players will download a 32GB patch that includes the data pack.

Here’s a helpful video for the important patch notes, or you can read below for all the notes.

Own Modern Warfare on PS4 or Xbox?

Today’s update includes a required download for PlayStation and Xbox, about 15gbs, and is required to access Modern Warfare.

Once you install the patch and select a mode, (multiplayer, campaign, Special Operations, etc.), you will be brought to a game install menu. Here, you’ll need to download Data Pack 1 from this menu. Once the download is complete, you will need to hard close and reopen the game application.

If you run into any issues or need support, reach out to us @ATVIAssist

For more Call Of Duty information, be sure to read our last article – Huge Mid-Season Update Dropping in Modern Warfare! . Also, stay tuned to IPC social media pages on Facebook and Twitter.